Throughout World War II, not only was Germany fighting a war with a number of different nations, they were also hiding a hideous discrimination war inside “their own” borders at the time… some pictures may be graphic. Many may have seen this photograph before…

This photo was taken right after the construction of the famous Concentration Camp named Auschwitz. The motto, “Arbeit Macht Frei”, means “Work Makes One Free”. This specific photograph is iconic due to the large amount of irony displayed in the sign above the entrance to the camp. The prisoners of the camp were told that they would be set free if they worked hard enough and long enough when in fact, the goal was to kill them in the long run. This is one specific example of Hitler’s lies that were displayed throughout World War II. 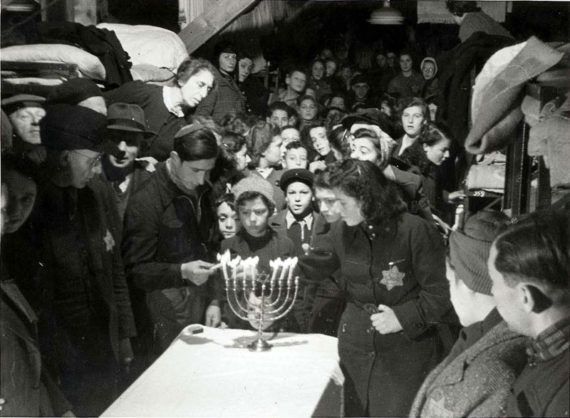 This photograph is titled “A Light in the Darkness”, courtesy of PopChassid. This photo is iconic in a number of ways. In 1943, when this photo was taken, these group of Jewish refugees gathered in a small room in Holland as they light the last candle during Hanukkah.  1943 was the start of the deportation of Jews and this photo explains how they all were able to come together (in a small room) and celebrate something they all believe in. This showed a light a hope.

This photograph was taken in Poland in a local ghetto where a Jew is being terrorized by two German soldiers. As you can see in the picture, the two soldiers are smiling or even laughing at the Jew as he is on the ground. Who knows what the soldiers did to the poor man. Beat him? Push him? Verbal abuse? We don’t know. All we know is that crooked look on the soldiers faces. Throughout the war, some soldiers agreed with the decisions Hitler made, but others didn’t. It looks like these two were enjoying what they were doing to this man. It is sad to see how these people were treated…